High-level meeting with the Ambassador of Slovakia for BBSF2022

On Thursday, October 11th, the Chairmen of the Organizing Committee of the Balkans & Black Sea Forum, Mr. Giannis Balakakis and Ambassador (a.h.) Mr. Michael B. Christides welcomed at the Forum’s premises the Ambassador of Slovakia, H.E. Mrs. Marcela Hanusová, and the Deputy Head of Mission, Mr. Marek Brieška.

The meeting took place in view of the 4th edition of the Balkans & Black Sea Forum to be held in Athens on 5-6 December 2022. The two sides had a constructive exchange of views concerning the high-level participation of Slovakia to this year’s Forum, which is organized at a time of tumultuous geopolitical, economic, and power-shifting challenges influencing the global scene and the socioeconomic equilibrium of many regions. 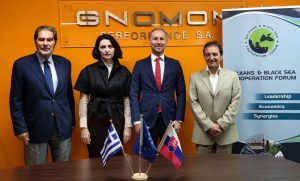