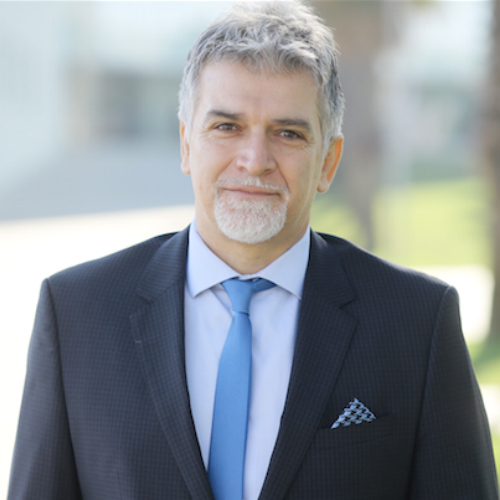 Born in Greece with studies as Agricultural Engineer and specializes in Soil Science at Aristotle University of Thessaloniki today lives in Barcelona where serves the COMPO EXPERT Group as Regional Director EMEA (Europe, Middle East & Africa).

He holds an MBA degree from one of the best business schools at the globe, IESE Spain.
COMPO EXPERT Group, with its broad range of high-quality, innovative, cutting edge- high tech fertilizers and raw materials, is among the global leaders in Specialty Agriculture and specifically in the areas of horticulture, vegetables, fruits and vines, nursery & ornamentals, turf & public green, landscaping and forestry having a world-wide presence.

Back in 2012 Mr. Chamakiotis was appointed as Head of COMPO EXPERT for South Europe, Balkans, Cyprus, Turkey and Africa and has been relocated with his family in Barcelona, Spain. Previously he was Managing Director for Compo Hellas and K+S Hellas.
His professional background counts more than 25 years in companies in chemical & Agri/Food sector such as BASF Hellas, ELTON Chemical Group, SHELL Chemicals and American CYANAMID, before joined COMPO EXPERT Group in 2008.

He is passionate in settling connecting platforms for the creation and capture of added value for his associates. He is doggedly supports continuous evolution with influence, guidance, and development of operational groups that he is working with, based on the vision setting, strategic direction, improvement of personal weaknesses, knowledge from failures, speed of decisions taken, knowledge of the market’s environment, preparation and proactivity for achieving ambitious goals.

He is also in the board of AGRIFOOD platform in Spain and the founder of a Solar Park company in Greece.

He is fluent in English, Spanish and Greek. He is married and father of one girl.

• The Black Sea region, is a critical wheat producer and is also the only part of the world producing barley in large quantities.