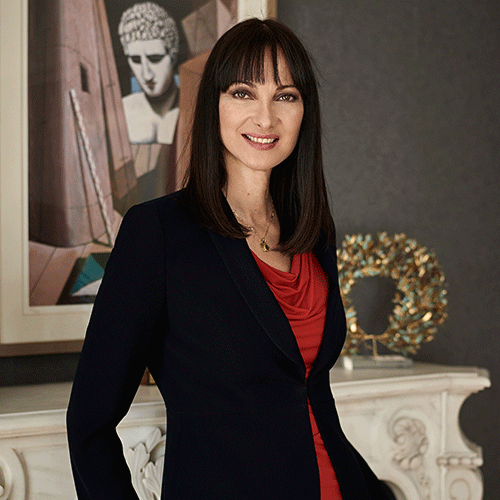 Mrs Elena Kountoura was born in Athens and was member of the Greek National Track and Field Team, holding numerous national records, international titles and awards.

She graduated from the Faculty of Physical Education and Sport Science/University of Athens. She speaks English, French and Spanish.

Elected six times as member of the Hellenic Parliament

In the elections of 2009 she was re-elected as MP of the Hellenic Parliament.

She continued her political carrier as independent MP.

In 2012, she was the first to join the Parliamentary Group of the newly established Movement “ANEXARTITOI HELLINES” (“Independent Greeks”).

She  was elected first in the Αthens A’ district with the “Independent Greeks” ballot, in all four last national elections, two in 2012 and two in 2015.

She had served as Secretary of the Movement’s Parliamentary Group and had been assigned with the overview of Tourism Affairs.

In the coalition government of SYRIZA-ANEL formed in January 2015, with Prime Minister Mr. Alexis Tsipras, she was handed the portfolio of tourism, as the Alternate Minister of Economy, Development & Tourism, and in November 2016 she was appointed Minister of Tourism.

Minister Kountoura is President of the “EUROPA DONNA HELLAS” organization raising awareness for the prevention of breast cancer and better health care for cancer patients.

She has been honored for her support in spreading the values of Paralympic Volunteerism in Greece.

In 2007 she was honored by the Greek Government as a Goodwill Ambassador for Social Volunteering.